What are the benefits of collective bargaining agreements in Norway?

A collective agreement is an agreement between an employee organization and an employers’ organization. In Norway, these agreements cover the whole country. The collective agreement gives you the right to better working conditions than usually obtained in the industry, incl. to pay for work on public holidays, longer holidays and holiday pay, better overtime pay, and better conditions for pension systems. The agreement also allows for greater freedom than the law provides to set working hours that suit long-distance commuters.
Wage regulations, including minimum wages, are in line with the agreement negotiated between trade unions and employers’ organizations. Organized in companies with
collective bargaining agreements have the right to annual local negotiations and help the unions to create local agreements.

In Norway, workers’ rights depend on the sector of the economy. There is no national minimum wage. In some sectors (construction, industry, agriculture and cleaning) there are so-called published minimum wages. This means that some of the provisions of collective labor agreements relating to minimum wages become law. Determined by
trade unions and employers the minimum wage applies to all workers in the industry, trade union members, and non-affiliated, domestic and foreign workers. In some industries, workers also qualify for workwear and a commuter allowance. When unions negotiate a higher wage, the statutory minimum wage also increases.

Organized in unions, in companies with a collective labor agreement, they are entitled to an allowance for work on all public holidays. The disorganized only get paid
for May 1st and 17th.

Organized in companies with a collective labor agreement, they have contracts with a working time limited to 37.5 hours a week. They also get higher bonuses too
overtime negotiated with the company. The disorganized are covered by the Labor Law and the 40-hour working week and 40% of the overtime allowance above 9 hours worked.
Contrary to the unorganized, who are entitled to holiday pay of 10.2% of gross salary and four weeks and one day of vacation, organized in companies with a collective labor agreement are entitled to vacation pay of 12% and 5 weeks of vacation.

What was the Pomeranian Provincial Council for Social Dialogue meeting in May this year about?

What were the main conclusions of the Tripartite Social Summit on June 23, 2020?

What were the beginnings of bilateral dialogue in Poland? 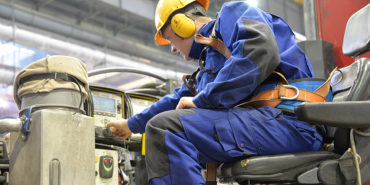 Labor inspection: there are many tasks ahead of us

What was the focus of the meeting of the Problem Team of the Social Dialogue Council for European funds on July 21 this year?

What was the ILO World Summit about in July this year – COVID-19 and the world of work?